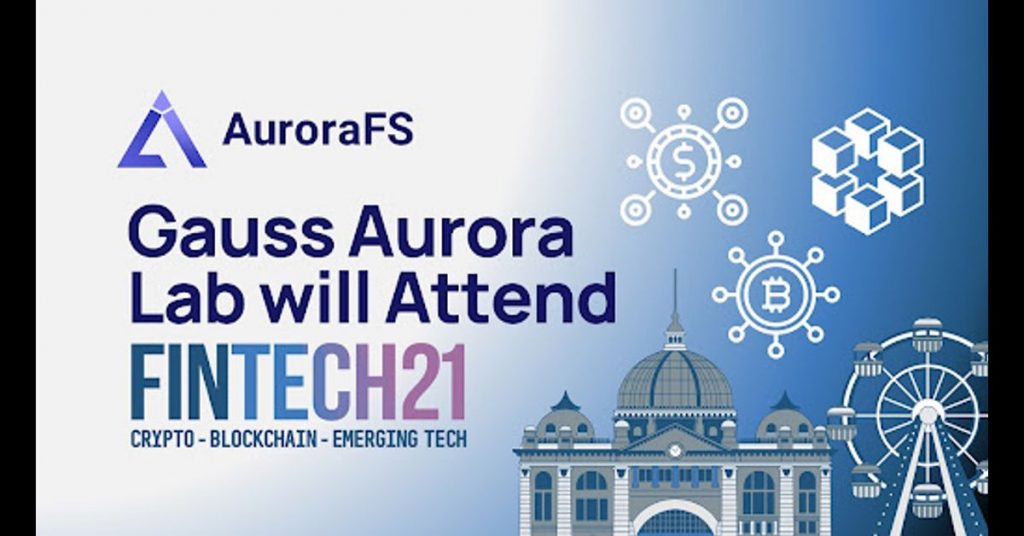 The Gauss Aurora Lab team, contributors to the AuroraFS decentralized P2P cloud storage and distribution network, will be in attendance at FinTech21 May 18-19 in Australia. The FinTech21 event will feature some of the latest advances in the Fintech industry, along with providing the venue and environment for the many anticipated and confirmed companies, investors, entrepreneurs, and industry professionals with the opportunity to network and collectively build around ideas and share what they’ve each been working on lately.

There is a significant focus on the exhibitions that will take places, such as new innovations in payment solutions, crypto and blockchain payment gateways, advances in payroll systems, developments in borrowing and lending platforms and technology, and much more. The most recent numbers reveal that already over 60 speakers are scheduled to present at FinTech21, with an additional 60+ full exhibitions also slated for the two-day event, hosted by ABF Events.

AuroraFS and Other Sponsors for FinTech21

As already disclosed, the Gauss Aurora Lab team will be in attendance at FinTech21. The team will have the pleasure of being present while the AuroraFS blockchain is represented at the event as an official FinTech21 sponsor, as attendees seek to learn more about AuroraFS and get further insight into the decentralized content storage and streaming network is and does.

Other sponsors to join AuroraFS as official FinTech21 sponsors are just a couple of large companies like Commonwealth Bank, a multicultural bank with businesses across several continents besides Australia. The large banking conglomerate has physical business established throughout Asia, New Zealand, the USA, and the UK as well. OPTUS and Coinspot are other named sponsors of the FinTech21 event. Both are notable names.

Coinspot is one of the longest established cryptocurrency exchanges in the world. The Australian-based exchange dates back to 2013, while OPTUS is an Australian telecommunications company and the nation’s second-largest mobile service provider. These are 2 of the several sponsors besides AuroraFS, which make up the many recognized names on the official list of FinTech21 sponsors.

What else is AuroraFS up to?

AuroraFS has been busy working towards preparation for their Q3 AUFS token launch, which is expected to accompany the full public launch of the independently operating AuroraFS blockchain network. A series of contests and competitions which rewarded Web3Tube video contributors, viewers, and also non-staking broadband miners on the AuroraFS network, just came to a close. Future airdropped AUFS tokens from those competitions are being sent out to all respective winners.

A new contest which is in honor of the FinTech21 appearance was also announced in the AuroraFS online community just days ago. Top 50+ video creators on AuroraFS’s Web3Tube decentralized video sharing and streaming platform, will be rewarded with varying amounts of BUSD stablecoin according to their placement in the newly announced AuroraFS Gleam Giveaway.

The top 3 winners will receive $200, $100, and $50 in BUSD respectively, with the remaining 50 randomly selected winners set to receive $10 for their participation also. The gleam giveaway is live until FinTech21, to give video creators time to develop and share their creations with the rest of the Web3Tube network.

Final Words and Next Steps for AuroraFS

With the recent contests, Web3Tube has had a good deal of real-time public use, and it’s a good thing because the AuroraFS development is expected to be fully live soon. Web3Tube gives video creators the ability to upload and share within a fully decentralized platform.

This ensures not only creators, their fans and viewers keep control and ownership of their data in the Web3.0 network protocol and set-up, but creators also have the ability to set cryptocurrency amounts to be charged for access to exclusive content for their most heavily engaged channel followers.

Additional developments from the AuroraFS decentralized network are its AUFS coin launch and all that will surround the highly anticipated event scheduled to take place sometime in Q3.

The telegram and social media platforms are updated regularly with news and the most recent contests and giveaways being conducted and sponsored by the network. Close followers can keep up to date with news and information as close to real-time as possible by becoming a member of the AuroraFS community Telegram channel.